Hartford Methodist Church supports the Mid Cheshire Circuit Kenya Fund. Rev Charles Makonde & Joyce  joined our circuit in September 2007 but before coming to England he was the Superintendant at Wesley MC in Mombasa.  Today back in Kenya they support an HIV/Aids clinic and community support centre and Timboni Primary School.

In the grounds of the Wesley Methodist Church, the centre is a drop-in clinic and employs a counsellor, Rose, who can test upto 10 people a day for the HIV/Aids virus, also counsels people on how to cope with the virus.  The centre supports them and their families by giving them food, as a balanced diet is important for the treatment to take effect.  Orphans of victims who succumb to the virus are placed with families and given food to help with the cost of  bringing them up.   Since our circuit has been supporting the clinic they have been able to employ another counsellor, therefore testing more people per day.

A medical camp was recently held in the slums of Mombassa where infection is at its highest and they have also accompanied a Kenya mission health team further north of  Mombassa to the Tarna river area of Malindi and Kalifi, these areas house the refugee camps for people from Somalia for which the East Africa appeal was set up 2 years ago.  They have even gone into the King’orani prison and tested 120 inmates.

The other project is at the Timboni Primary school and is in Charles’ home village of Kambe, about 23 miles north of  Mombasa.  We send money regularly to provide 2 meals a day for the 230 pupils, which are cooked in the new kitchen with all the mod cons of a built-in cooker and this is what they produce.  In 2009 the school obtained primary status therefore expanding each year and more mouths to feed.

Funding is sent to be split between the two projects. Members of the church have also visited the projects with container shipments of resources.

The Mission that our small committee set out to do, has changed the lives of many adults and children in and around Mombasa and we gain much satisfaction in knowing that any money or items that we send to Kenya get to the point of use with little overheads as monies transfered are sent directly to the Bank accounts of both the projects. 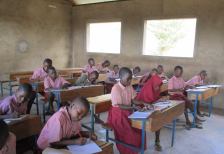